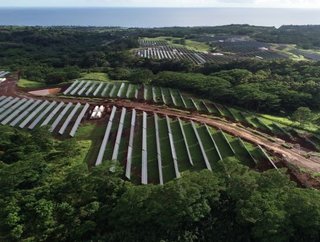 The AES Corporation and Kaua’i Island Utility Cooperative (KIUC) have inaugurated the Lāwa’i Solar and Energ...

The AES Corporation and Kaua’i Island Utility Cooperative (KIUC) have inaugurated the Lāwa’i Solar and Energy Storage Project, the largest operational solar and storage system in the world.

The project, owned and operated by AES Distributed Energy, consists of a 28 MW solar photovoltaic (PV) and a 100 MWh five-hour duration energy storage system, and will help Hawaii meet its goal of reaching 100% renewable energy by 2045. The new PV peaker will deliver roughly 11% of Kaua’i’s power, making the island more than 50% powered by renewables.

By combining solar power with battery-based energy storage, intermittent renewable generation can be converted into safe, reliable and higher-quality power. The fully integrated Lāwa’i project will eliminate the use of 3.7 million gallons of diesel annually, while supporting three vital scenarios in power distribution – it allows for solar generation to supply the grid while charging the battery system, dispatches power stored in the battery system to the grid during peak demand periods and can dispatch solar and battery power simultaneously to answer spikes in demand in addition to supporting the grid through provision of ancillary services.

Declining costs of solar, and use cases such as this project, will make similar systems the smartest choice to leverage abundant energy from renewables in many other parts of the world. AES is established as an early market leader in firm renewables, with solar + storage solutions representing half of AES Distributed Energy’s 128 MW under construction and more than 250 MW in late stage development. AES Distributed Energy is currently constructing an additional 19.3 MW solar + 70 MWh battery energy storage facility for KIUC located on leased land from the U.S. Department of Defense within the Pacific Missile Range Facility – Barking Sands (PMRF) Naval Base.

AES is also continuing to develop firm renewables projects in Hawaii and elsewhere with more projects to be announced in 2019.

Andrés Gluski, AES President and Chief Executive Officer said: “Kaua’i has adopted an ambitious renewables mandate and the Lāwa’i project will help reduce its reliance on fossil fuels while generating clean, reliable and affordable energy. As a supplier of power to Hawaii for more than 25 years, we are honored to have been chosen by KIUC to help demonstrate its commitment to the state’s vision of a cleaner energy future. We believe this project is a significant step toward ushering in the wider era of firm renewables.”