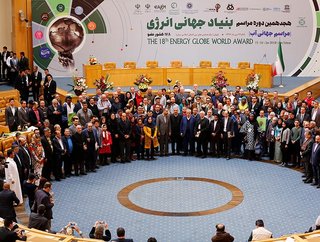 The Energy Globe World Award 2017 winners were announced on 16 January at the presidential palace in Tehran. The ceremony...

The Energy Globe World Award 2017 winners were announced on 16 January at the presidential palace in Tehran.

The ceremony hosted guests from 60 different countries, with the minister of the Iranian Government announcing the winners.

The awards received applications from 2,000 projects spanning across 178 countries.

The jury, which was led by Maneka Gandhi – environmentalist and Indian Union Cabinet Minister for Women and Child Development – determined the 16 finalised and awarded the five best.

The five awards were categorised into Earth, Fire, Water, Air, and Youth.

The Earth award was given to the Rural Green Environment Organisation, based in Afghanistan, for its work with degraded watersheds and establishing fruit orchards in one of the most remote and deprived mountainous valleys.

The category of Fire was won by the Kalinga Institute of Social Sciences from India, which had discovered ways to reduce the carbon footprint of large scale cooking.

Kerman Copper region shared the award due to its success of integrating water to the Sarchechmen mine.

The Austrian Post won the Air award for reducing its ecological footprint by implementing the use of electric vehicles.