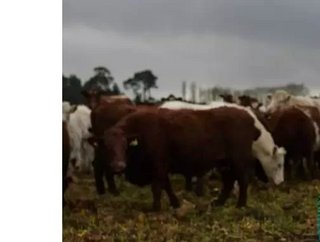 Morrisons will work with its 3,000 farmers and growers to produce affordable net zero carbon meat, poultry, fruit and vegetables...

Morrisons has pledged to be the first supermarket to be completely supplied by ‘net zero’ carbon British farms by 2030, five years ahead of the market.

Over the next nine years, Morrisons will work with its 3,000 farmers and growers to produce "affordable net zero carbon meat, poultry, fruit and vegetables".

Morrisons expects that the first products to reach net zero carbon status will be eggs as early as 2022, followed by lamb, fruit, vegetables, pork and beef in the years to follow.

UK agriculture currently accounts for 10 per cent of all UK greenhouse gas emissions, with new research revealing that two thirds of people consider the environmental impact of the food they eat. The National Farmers Union has asked farmers to work towards a 2040 net zero goal, and other supermarkets are working towards 2035.

Morrisons has its own expert Livestock and Produce Teams, works directly with farmers, and takes meat, fruit and vegetables direct from farms to its 20 fruit, vegetable and meat preparation sites.

This month, Morrisons will start working with a selection of meat and produce farmers - to create net zero carbon farm ‘models’. Together with the farmers they will look at the emissions picture through the whole lifecycle of farm produce - from germination to leaving the farmgate for a Morrisons store. Once a workable blueprint has been established, the models will then be shared with all Morrisons farmers, so that all food can be produced in this net zero carbon way.

The farm models will look at reducing carbon via

Within agriculture, beef farming is the most carbon intensive - generating 45 per cent of carbon emissions for only five per cent of products sold. Nearly half of this is down to methane produced by cattle. Morrisons will work with its beef farms to use smaller cattle breeds, pick low methane feeds, and look at methane reducing supplements (e.g. seaweed).

As part of the programme, Morrisons will also work with universities, vets, farming and countryside organisations and carbon experts. Morrisons will partner with the NFU to pool farmer knowledge, work with Natural England on planting and water use, and use industry experts to measure and evaluate data.

Morrisons will also work with Harper Adams University, which specialises in agriculture and environmental subjects to set up the world’s first School of Sustainable Farming to offer farming training.

David Potts, Chief Executive of Morrisons, said: “Climate change is one of the biggest challenges for our generation and growing food is a key contributor to greenhouse gas emissions. As British farming’s biggest supermarket customer, we’re in a unique position to guide our farms and help lead changes in environmental practices. It’s years ahead of industry expectations - and an ambitious target - but it’s our duty to do it.”

Environment Secretary, George Eustice MP, said the UK is the first major economy to legislate for net zero emissions by 2050 and its farmers will play a key role in achieving the target.

Minette Batters, President of the National Union of Farmers said: “British farming has a key role to play in the nation’s drive to net zero. Our contribution spans three pillars of action - reducing emissions, storing carbon on farmland, and renewables and the bioeconomy. Our members are already playing their part to help achieve the NFU’s ambition of reaching net zero agriculture by 2040 and want to do more. I applaud Morrisons on its commitment and look forward to continuing our good working relationship.”

Patrick Holden, Chief Executive of the Sustainable Food Trust said: “Morrisons has shown real leadership in setting challenging targets for emission reductions and for encouraging their suppliers to produce in more sustainable ways.”

Morrisons net zero carbon UK agriculture target forms part of its plan to become net zero for emissions by 2040, in line with the international Paris Agreement.

Tesco is bringing forward its ambition to become net zero in the UK by 2035, and tackling the two biggest sources of emissions – electricity production and transport.

The grocery retail giant is launching a new partnership with renewable energy investor, Low Carbon, that will see three new solar farms in Essex, Anglesey and Oxfordshire which will generate up to 130GWh of energy per year.

The work is part of the retailer’s commitment to use 100 per cent renewable electricity across the Tesco Group by 2030 and will save 30,308 tonnes of CO2 per year.

The current project follows the supermarket’s announcement last year that it would begin sourcing renewable energy from five onshore windfarms, and it is fitting thousands of solar panels across its UK store network, with 60 stores fitted out already.

On the roads, Tesco has rolled out 30 electric delivery vans in Greater London and plans to have a fully electric home delivery fleet by 2028.

Tesco is also rolling out 2,400 charging points for customers across 600 stores, with 400 stores due to be fitted with the chargers by the end of 2020.