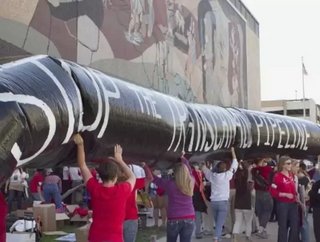 Thousands of protesters encircled the White House today, calling for the President to stop the Keystone XL pipeline from Canada. After the President i...

Thousands of protesters encircled the White House today, calling for the President to stop the Keystone XL pipeline from Canada. After the President indicated he would be making a final decision on the construction of the massive pipeline-set to run from Alberta to Texas-last week, protests have escalated.

“The State Department’s in charge of analyzing this, because there’s a pipeline coming in from Canada,” said Obama to Omaha’s KETV. “They’ll be giving me a report over the next several months and, you know, my general attitude is, what is best for the American people? What’s best for our economy both short term and long term? But also, what’s best for the health of the American people?”

Protests to TransCanada's plans in the US are not new and the fate of the situation is hard to tell. Thus, TransCanada’s Plan B is to set to use British Columbia as an alternate route to transport oil to Asian markets.

But, a majority of British Columbians are showing opposition to oil tankers along their coasts as well. The Enbridge Northern Gateway pipeline just failed to win endorsement from Premier Christy Clark. Last week, natives in the Tsleil-Waututah Nation opposed the plan to expand the Kinder Morgan pipeline.

Apparently, the promise of thousands of construction jobs isn’t winning the approval of most. It’s going to be a battle between the people and Big Oil, dependent on the President’s decision. In the meantime, protesters bring media attention to the environmental implications of building the Keystone XL pipeline as they gather today in a last stitch effort.

“You can’t occupy the White House, but you can surround it,” Bill McKibben, founder of 350.org, an organization dedicated to minimizing climate change, said at a Nov. 4 news conference.