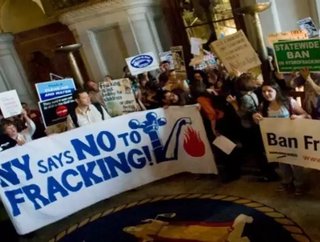 Natural gas companies say half of their lease holdings in the Marcellus Shale region in New York state will now be off-limits thanks to proposed stat...

Natural gas companies say half of their lease holdings in the Marcellus Shale region in New York state will now be off-limits thanks to proposed state regulations and bans.

Environmental groups, fearful of the impacts of fracking on the region's underground water supplies, are pushing for a ban on gas drilling, while the industry and landowners hungry for profits from leasing land to drillers are fighting to halt that movement. Landowners are pressing state officials to consider the rights of property owners as they make their final decision on shale development in the area.

The Joint Landowners Coalition of New York presented a “Declaration of Rights” Wednesday. "Landowners' rights are being trampled by those with extreme political agendas," said Dan Fitzsimmons of Binghamton, president of the 70,000-member coalition.

After four years of studying the environmental impacts and developing new guidelines for exploring shale, the Department of Environmental Conservation will decide on the band in coming months.

Jennifer Huntington, a Cooperstown dairy farmer, is suing the Otsego County town of Middlefield over its ban on fracking. The case is now being appealed after a state supreme court judge ruled in favor of the town in February. In another case, gas-driller Anschutz Exploration Corporation is suing the town of Dryden for bans on drilling in a state supreme court ruling, which is also being appealed.

Supporters of new drilling say the bans conflict with the rights of landowners to develop natural resources on their property, noting that such development would create jobs and provide a boost to the local economy.