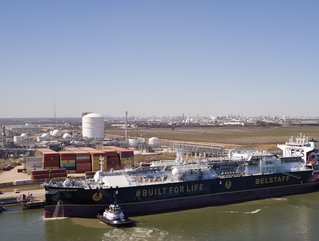 INEOS has introduced the Pacific INEOS Belstaff in Houston, which is billed as the world's first 99,000 CMB VLEC (Very Large Ethane Carrier).

It is fitted with newly designed type B tanks that allow for the most effective use of capacity. The ship's name is a nod to the Belstaff clothing brand, which is also owned by INEOS, and will primarily built transport US ethane to China and Europe, and has the potential to carry other products such as ethylene and LPG.

Built in Jiangnan, China and operated by Pacific Gas, the Pacific INEOS Belstaff is made of approximately 18,000 tonnes of steel and 40,000m of piping. At 230m it is longer than two football pitches combined.

The launch of the Pacific INEOS Belstaff takes the INEOS ethane fleet to eleven vessels consisting of 3 VLEC’s, and 8 ‘dragon’ ships, which have been regularly transporting ethane across the Atlantic for over 5 years. A fourth VLEC, is set to launch this Spring.

The global ethane market is expected to grow at a CAGR of 4.5% from 2021 to 2028, according to Industry Growth Insights. The growth of the market can be attributed to the increasing demand for ethane in various applications such as welding, lighting, and chemical processing. Ethane is also used as a feedstock for production of petrochemicals such as ethylene and propylene.