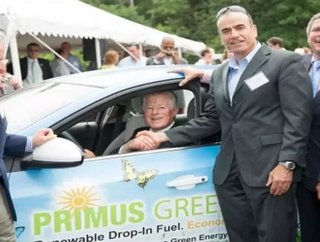 Hillsborough, N.J. (June 26, 2012) &ndash; The test drive of an automobile fueled with 93-octane gasoline made from natural gas and biomass was the h...

Hillsborough, N.J. (June 26, 2012) – The test drive of an automobile fueled with 93-octane gasoline made from natural gas and biomass was the highlight of a dedication ceremony for Primus Green Energy’s new $7 million demonstration plant at the company’s Hillsborough, N.J., complex on June 22.

The event was attended by a distinguished roster of more than a dozen federal, state and local dignitaries, including the keynote speakers, former N.J. Gov. James J. Florio and N.J. Department of Environmental Protection Assistant Commissioner for Sustainability and Green Energy Robert A. Marshall, who took part in the ceremonial fueling of the car with Primus’ high quality, 93-octane alternative gasoline.

The Second Generation of Biofuels

Primus Green Energy is a leader in the alternative fuel industry whose goal is to produce affordable replacements for transportation fuels made from petroleum, thus enhancing energy security by reducing dependence on foreign oil. Primus is considered to be the only company that is making a drop-in replacement for gasoline, as opposed to alternative fuels that require costly engine modifications or fuel delivery infrastructure overhauls.

The speakers’ remarks centered on Primus’ landmark achievement, which marks a milestone in the transition from a fuel economy based on petroleum to one based on domestically produced alternative fuels. This theme was sounded by Gov. Florio when he reminded the audience in his keynote address that they will some day be able to look back and “take pride at being here at the beginning.”

“No country can out-innovate the United States -- not Europe, not China, not India -- and no state can out-innovate New Jersey,” added Leonard Lance, U.S. Congressman from New Jersey’s 7th Congressional District, who included Primus Green Energy on a list of Garden State innovators such as Thomas A. Edison and Bell Labs, where modern technologies such as the laser, the cell phone and the fax machine were developed.

The event, which was attended by more than 100 guests, took place at the site of Primus Green Energy’s new demonstration plant, now under construction, which is slated for completion in late 2012. The demonstration plant, which is designed to produce 33 liters of gasoline per hour, will serve as the proving ground for the company’s first commercial plant, on which the company expects to break ground next year.

The new demonstration plant will showcase the flexibility of Primus Green Energy technology in terms of both feedstock and end product. Although the plant will initially use natural gas as a feedstock, it will later be adapted to use biomass in the form of wood pellets or energy crops. The end products will include a high quality gasoline that is virtually identical to gasoline produced from petroleum, and jet fuel.

“The construction of our new demonstration plant is a tremendous achievement that showcases our ability to scale our technology,” said Robert J. Johnsen, Primus’ chief executive officer. “We have gone from the concept stage to the demonstration stage in only five years and now, with the demo plant, we can further refine our technology with the goal of commercializing our technology next year.”

The event also featured tours of Primus’ existing pilot plant, where the company is now making small amounts of gasoline from natural gas and biomass, including the gasoline used to fuel the car for the test drive.

Primus Green Energy has been funded since its inception by a single investor, IC Green Energy, which is the alternative energy investment arm of Israel Corp., Israel’s largest publicly traded corporation. The commitment of IC Green Energy, which was lauded by the speakers in their remarks, has allowed the company to progress steadily from concept to the brink of commercialization.

IC Green Energy’s president and CEO, Dr. Yom-Tov Samia reminded government officials of the importance of committing funds for research and development to an industry that is vital to the energy security of the United States and Israel.

Dr. Samia’s remarks were echoed by N.J. Assemblyman Upendra J. Chivukula of Legislative District 17, who is known as New Jersey’s “Mr. Energy” for his sponsorship of innovative legislation that has made New Jersey a national leader in solar energy. “American innovation doesn’t come cheap -- it has to be backed by investment,” he noted. “If we are going to look to the future, we have to invest in these technologies.”

Other speakers included Howard Henderson, state director for rural development for the U.S. Department of Agriculture; Joseph L. Fiordaliso, commissioner of the N.J. Board of Public Utilities; N.J. Sen. Christopher “Kip” Bateman of Legislative District 16; and Joanna Underwood, president of Energy Vision, a non-profit organization focused on the challenge of sustainable transportation.

Headquartered in Hillsborough, N.J., Primus Green Energy has innovated a flexible alternative drop-in fuel technology that produces high-octane gasoline that can be used directly in engines as a component in standard fuel formulas without costly engine modifications or changes to the fuel delivery infrastructure. The Primus Green Energy technology is a proprietary version of proven commercial technologies to convert natural gas and/or biomass to a variety of liquid transportation fuels such as gasoline, diesel and jet fuel or specialty chemicals such as xylene and toluene. Primus Green Energy's technology has recorded the highest cellulose-to-gasoline conversion efficiency rate in the industry; is feedstock flexible through the use of natural gas as a supplement or replacement for biomass; and has low capital and operating costs. Primus Green Energy is funded by IC Green Energy, the alternative energy arm of publicly traded Israel Corp. For more information, visit www.primusge.com.