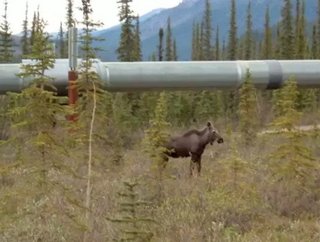 The United States is benefiting greatly from the Canadian oil sands, providing abundant fuel from a friendly neighbor to the north, thus reducing depe...

The United States is benefiting greatly from the Canadian oil sands, providing abundant fuel from a friendly neighbor to the north, thus reducing dependence on foreign oil from nations with a less-friendly attitude toward the U.S.  One would assume that U.S. regulators would be happy to get their oil from Canada, but not so fast.  Apparently U.S. lawmakers are expressing concern that the diluted bitumen derived from Canadian oil sands may be corroding U.S. oil pipelines.

U.S. Congressmen Henry Waxman, the leading Democrat on the House of Representatives’ Energy and Commerce Committee, is worried that regulatory oversight isn’t keeping up with an increasing amount of diluted bitumen being transported via U.S. pipelines. "I'm concerned that the industry is changing, but the safety regulations are not keeping up with the changes," he said at an Energy and Commerce subcommittee hearing. "That could be a recipe for disaster down the road."

Anthony Swift of the Natural Resources Defense Council said at the hearing, "It is in the public's best interest for our pipeline safety for regulators to evaluate the risks that high volumes of heavy, corrosive and abrasive crudes, such as diluted bitumen, will have on the U.S. pipeline."

A number of pipeline accidents in the U.S. Midwest have some questioning whether diluted bitumen may be to blame. TransCanada's existing Keystone pipeline leaked 10 barrels of oil, due to a faulty fitting at a Kansas pump station last month. That accident followed a 500-barrel spill at a pump station in North Dakota in early May.

The committee last month passed a bill requiring the Pipeline and Hazardous Materials Safety Administration to study the impact of diluted bitumen on U.S. pipelines.

Even Republicans think the issue should be investigated. "I think it is something we need to look into," said Republican Representative Joe Barton.

However, President of the Association of Oil Pipelines Andrew Black disputes any claims that diluted bitumen is contributing to pipeline corrosion, saying, “Diluted bitumen has been moved through pipelines for many years.”

At any rate, what harm could come from assessing the risks?  If there’s no problem, then we continue to take advantage of Canadian oil.  If there is a corrosion problem, we invest in pipeline infrastructure to reduce corrosion.  It would be nonsensical to risk losing the pipelines, which cost billions to construct, simply because we didn’t take action early on.