Eco-Death: How to Bury an Earth Friendly Corpse 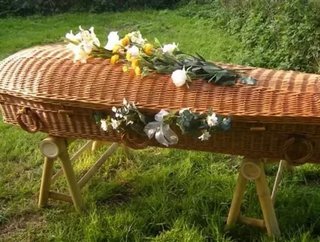 Click here to experience this article in our digital reader Written by Heather Rushworth The ways in which dead bodies are burdening the earth are en...

The ways in which dead bodies are burdening the earth are endless. Overpopulation promises to have a global person count of approximately ten billion earthlings by 2100. Yet our graveyards are already overflowing with the remains of the dead, and the methods used to process the deceased are poisoning the vitality of mother earth. Noxious embalming fluids and carbon producing cremation processes are ensuring dead people continue to have a negative impact on our planet, long after their sinful deeds of over-consumption and irresponsible indulgence have destroyed our delicate eco-system during their waking lives.

But hey, we love the dead, so what are some eco-conscious ways to bury the deceased, and maybe even offer them some karmic salvation in the process?

One of the basic measures we can take to ensure our corpse has a beneficial effect on our planet is through a “green burial.” This process is much like the ‘traditional burial’ as it involves burying the dead in a box underground. However, the box is not coated in toxic paint, and the body isn’t puffed up with formaldehyde like a poisonous corpse pastry. Instead, the immediate thrill of seeing your deceased love one painted up like a drag queen by a chemical-happy mortician is replaced by a simple, organic process involving wrapping the body in a shroud and placing it in a biodegradable coffin. This is then buried in the microbe-rich soil found a mere three and a half feet under the earth’s surface, so that nature herself can break down the body and use it to fertilize trees and plants.

While a green burial is picturesque in theory - civilization has been burying the dead in such a manor for thousands of years - it is not the safest method in terms of disease control and public health. Unfortunately, wild foraging animals do not discriminate in their selection of meat, and could sniff out recently buried corpses – even if those bodies are contaminated with an infectious disease.

While cremation does get rid of the pesky physical burdens and infections that burying corpses presents, the process produces up to 350 pounds of greenhouse gases per dead body. This reality is obnoxiously hazardous to our planet, and we need to take measured steps away from this noxious burial habit.

If nothing else, the remains of the dead can be utilized for green endeavors, like to heat swimming pools without the consumption of electricity. No, that is not a snide quip; Redditch Borough Council in London has adopted the idea of harnessing the wasted heat from cremation temperatures to heat pools, saving the City over $22,000 in electricity expenditures.

However, heating pools with body parts is not for everyone, some people may want to use their remains to offset their corpse’s carbon emissions. In such case, the deceased can bury their ashes in a seeded container, that when planted, grows into a carbon consuming tree in their honor.

Tree or no tree, we need to cut the traditional cremation process out of our cultural psyche. We are alive in the future, and burning is so ‘Black Plague’ chic. Scientists hip to that notion have created a carbon free process called, ‘Aquamation’ which disintegrates the integrity of a body by placing it in a flowing stream of water mixed with potassium-hydroxide. While the process is just as effective at pulverizing a corpse, it uses approximately five to ten percent of the overall energy that a cremation entails, and none of the space traditional burials require.

While the above options are making huge strides towards conserving the vitality of the planet, they are a tad boring. So what is an eco burial option for those wanting to go out with a bang? By far the most epic option for burial is: expelling your remains into space via rocket.

I know, this sounds ridiculously frivolous and expensive. However, when paired with some of the other eco-methods mentioned like Aquamation, having the entire universe as your casket could have reasonable impact on the planet and deliver the sort of epic finale most of us mortals crave. Cultural legends like Timothy Leary and the creator of Startrek, Gene Roddenberry have already launched their remains into the endless embrace of the galaxy. The process involves placing the remains in a tin container, and rocket launching them through the atmosphere. Of course, eco-friendly rockets and containers would need to be utilized. However, as the planet’s population continues to rise, and sending billions of Aquamated corpse remains into the sewer system is too sickening an option to bear, catapulting remains into space may be the only option to keep our earth reasonably clean and tidy.

Whatever your death wish may be, the future is bright with eco-options for burying your corpse that could save your loved ones major bucks – money you can use towards an elaborately fun disco funeral service in your honor.