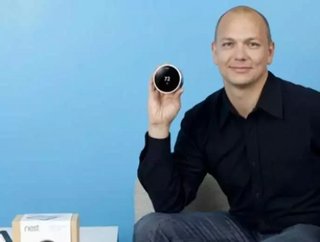 Thermostats control 10 percent of all US Energy. Like most of us, Tony Fadell, known as the &ldquo;godfather&rdquo; of the iPod, didn&#39;t think they...

Thermostats control 10 percent of all US Energy. Like most of us, Tony Fadell, known as the “godfather” of the iPod, didn't think they mattered either until he realized they account for half of homeowners' energy bills. Inspired, Fadell decided to redesign the outdated, ugly thermostats and create something that makes more sense for consumers.

The revelation came to him when he and his wife retired from Apple a few years back and started building a green home in Tahoe, CA. When his architect showed up with some expensive options for thermostats, he wasn't expecting to see something that looked like a “beige box from the 90s,” he told TechCrunch in an interview. After doing some research, he discovered hundreds of others that all looked and performed about the same. That's when he decided to design a device geared more towards consumers rather than the contractors, who could care less about efficiency or aesthetic appeal.

“It was unacceptable to me that the device that controls 10 percent of all energy consumed in the U.S. hadn’t kept up with advancements in technology and design,” said Tony Fadell. “We hope it will not only save money and energy, but that it will teach and inspire people to think more about how they can reduce home- energy consumption.”

Called the Nest, the easy to use device has motion-tracking sensors that detect the presence of people to adjust temperatures accordingly and is smart enough to learn and mimic schedules. It's the only thermostat that essentially programs itself, learning from its users' habits.

Within the first week of use, the Nest begins tracking a schedule of how temperature is set periodically throughout each day and adjusts accordingly thereafter. Using activity sensors, it can also detect the absence of people within a couple hours and know to reduce energy consumption, but can also be controlled remotely from any smartphone, laptop or tablet. A leaf will pop up on the LCD display whenever energy—and money—is being saved.

Released last month for $249, the Nest easily pays for itself within a year with minimal effort. For every degree a home is kept cooler in colder months or warmer in hotter months, about five percent of energy is saved. Shifting habits by just a few degrees over the course of a year can reduce energy bills by more than enough to cover the initial cost of the device. Plus, it looks cool.