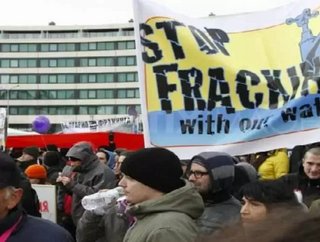 In preparation of a full ban on shale gas drilling, Bulgaria cancelled an exploration permit for the unconventional energy source that it had previous...

In preparation of a full ban on shale gas drilling, Bulgaria cancelled an exploration permit for the unconventional energy source that it had previously granted to Chevron in June due to environmental concerns.

Chevron will still be allowed to drill for oil and gas in northeastern Bulgaria, but will be prohibited from using hydraulic fracturing, which critics fear could possibly contaminate underground waters and trigger earthquakes.

What the Frack? Coal Seam Gas Debate Heats up in Australia

Protecting the Grand Canyon from Miners

Though the original plans to explore shale gas in the region showed great potential in reducing the country's almost complete reliance on gas imports from Russia's Gazprom, there have been widespread calls for a moratorium on proceeding any further.

Adding to global scrutiny of the use of “fracking,” Bulgaria has decided that the associated risks are too high and has given in to the public backlash against its use. Though shale gas exploration has revolutionized the US natural gas industry, many states are beginning to ban fracking as minor earthquakes become larger and more frequent. France also banned the unconventional drilling method in July and Britain suspended the deep-excavation practice near Blackpool in the spring.