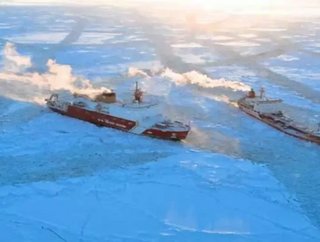 After a daunting journey of 5,000 miles through thick ice and harsh conditions, a Russian tanker finally completes its mission of delivering diesel fu...

After a daunting journey of 5,000 miles through thick ice and harsh conditions, a Russian tanker finally completes its mission of delivering diesel fuel and gasoline to Nome, Alaska, where residents are experiencing one of their coldest winters on record. A first-of-its-kind mission, the challenging endeavor has led to a successful delivery of 1.3 million gallons of fuel from a ship frozen in place to the icy city half a mile away in sub-zero temperatures.

With the ship stuck in ice, offloading fuel was a tricky task as new challenges arose everyday over the last couple weeks. After pumping for over 60 hours, the mission marked the first time petroleum has ever been delivered to a western Alaska community by sea in winter.

For its residents, the success of the operation provide incredible relief that there will be enough fuel to get them through June. Due to a massive storm that hit in November, Nome missed its last pre-winter barge fuel delivery and would have otherwise run out of fuel by March or April.

It's been a long ride since the Russian tanker Renda began its journey from Russia in mid-December. A huge milestone in oil transportation, the next challenge will be getting the tanker out of the ice and back to its home port safely. An icebreaker is expected to help the tanker tread its way back through the hundreds of miles of ice and back to open waters.