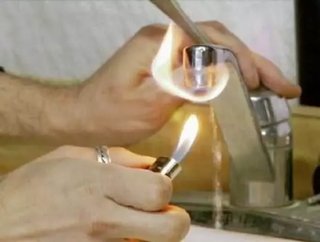 Josh Fox, the director of the controversial documentary portraying shale gas production as dangerous, was arrested at the White House yesterday after...

Josh Fox, the director of the controversial documentary portraying shale gas production as dangerous, was arrested at the White House yesterday after refusing to stop taping a Republican-dominated Congressional hearing.

The hearing focused on the Environmental Protection Agency's draft report finding that an aquifer in Wyoming had been polluted by fluids from hydraulic fracturing, the drilling technique under scrutiny in Fox's Oscar-nominated film, “Gasland.”

Shale gas proponents say the film inaccurately portrays the safety record of US shale gas production, over exaggerated in scenes featuring flaming tapwater as a result of polluted water supplies from fracking.

Congressman Maurice Hinchey called Fox's arrest “beyond unacceptable,” claiming that it was an act of “blatant censorship and a shameful stain on his Congress.”

Though shale gas production has skyrocketed over recent years, and is seen as a crucial component in transitioning over to more renewable energy and away from coal and crude oil, many fear that its rapid development threatens drinking water, public health and may even cause earthquakes.

Republicans accused the EPA for citing politics versus facts, but the EPA continued to defend its work in Pavillion, Wyoming.

“EPA has acted carefully, thoughtfully, deliberately, and transparently in our ground water investigation and in sharing the data and findings contained in our draft report,” EPA region 8 administrator Jim Martin. "We have applied the highest standards of scientific rigor."

It remains unclear whether Fox was actually breaking the law.