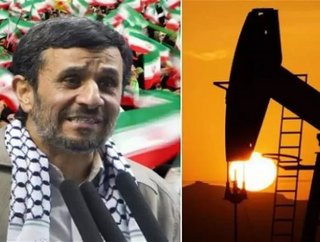 Iranian President Mahmoud Ahmadinejad said Iran should stop exporting crude oil and focus on selling refined oil products instead, a day after the US...

Iranian President Mahmoud Ahmadinejad said Iran should stop exporting crude oil and focus on selling refined oil products instead, a day after the US tightened sanctions on Tehran.

"We must stop the exports of crude oil," Ahmadinejad was quoted as saying by the Islamic Republic News Agency (IRNA) in a speech opening a new refinery near Tehran. "We must go in such a direction that we do not export crude oil, and this is doable through the development of refineries and distribution."

Due to US and European Union sanctions aimed at starving the government of vital oil revenues for its nuclear program, Iran's oil output has reached its lowest level in 20 years, according to independent data released in May. Typically, oil and gas accounts for more than half of Iran's export revenue.

Washington has prohibited US companies from trading in all Iranian oil products for years, the EU banned importing crude and refined products from Iran in July and Asian customers have been pressured to follow suit.

To help dampen prices that rose sharply after Iran's threats to shut the Strait of Hormuz, Saudi Arabia has boosted oil production to counter the supply gap. Ahmadinejad, however, argues that prices are being kept artificially low.

"The price of oil is political and not based on economics, and if pricing were based on reality, the price of oil would be much greater than the prices in the markets now," Ahmadinejad was quoted as saying.

Rather than sell crude, Oil Minister Rostam Qasemi said that Iran hopes to turn one million barrels a day of oil into refined products by March 2016, according to the Fars new agency.