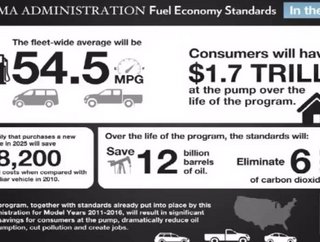 Last week, Energy Digital reported that American automakers were fighting President Barack Obama’s push for a fuel efficiency standard of 56 miles per gallon by 2025.  Diverting untold amounts of money into campaigns claiming the fuel standard would cost people their jobs and raise the cost of vehicles, the automakers have apparently conceded to a reduction of less than 2 percent of the original proposal.  Obama has officially announced a fuel efficiency standard of 54.5 mpg for vehicles manufactured in the U.S. by 2025.

The President and environmental experts claim that the new fuel efficiency standard will reduce fuel consumption by 40 percent and carbon emissions by 50 percent.  This marks Obama’s second victory in his time in office at setting higher fuel efficiency standards, the first being a 28.3 mpg standard.  The new standard will nearly double that.  No president since Reagan has accomplished that.

Ford, GM and Chrysler have agreed to the new standards.  It seems odd that the companies were so up in arms about the 56 mpg standard, claiming it to be unrealistic.  Yet, they are ok with 54.5 mpg?  Who knows what kind of politics and closed-door deals are involved here, but something seems a little strange.  At any rate, in about 13 years we should be breathing a little easier and feeling less pain at the pump with these new fuel efficiency standards.